I testified in Hartford about the need to repeal Connecticut’s state gift tax. It doesn’t raise a lot of money and discourages high net worth people from moving to Connecticut and encourages those in CT to relocate. Until this month we at least had one other state, Minnesota, that also had a gift tax, but as Ashlea Ebeling reports for Forbes Minnesota has repealed its statute.

She quotes me as saying the tax is an abomination and it is. What is the point of a tax that costs a state more money than it raises. The gift tax’s greatest impact is on very large estates so by being the only state in the union with such a tax we are discouraging the very families that would pay much more in income and other taxes, start businesses, give to charities and keep the gold in the Gold Coast from moving to Connecticut.

Connecticut is also on of the few states in the US with an estate tax, but as you can see from Ashlea’s article analyzing the state estate tax laws every state in New England and the Mid-Atlantic states also have a death tax so the CT estate tax is less of a factor in home buying. In fact for the moment, moving to CT from NY will save you estate taxes. Greenwich’s high end is definitely doing better in 2014 than 2013, but we still have a ways to go.

Now is an even better time to write you state legislator and ask him or her to repeal the last remaining gift tax in the nation.

Welcome to the GreenwichStreets.com weekly open house list. If you are new to the list here some quick pointers:

You can give me a call anytime at 203-969-7900 if you have a question about Greenwich real estate or any property.

Please click here for the interactive map. The static map is below.

The Word document prints out nicer if you are looking for something to take with you in the car.

The Spring Market is waking up with 39 Open Houses scheduled for Sunday, March 23rd. The prices range from a condo for $260,000 to a single family home for $4,500,000. I’m having an open house at 1 Ferris Drive in Old Greenwich. The house is the least expensive house in OG. It needs work, but you get 4BRs and 2/1 BA in Dundee and Eastern MS districts.

Please click here for the interactive map of the Open Houses and see below for the static map.

Thanks to Rob Pulitano for preparing the list of Open Houses and the interactive map and to Pam Toner for the hot links and the Word document attached. The Word document prints out better if you are looking for something to take with you in the car.

Below is the static map of the Open Houses:

This bill would partially coordinate the CT law with the federal revisions. The testimony actually seemed to get some traction with the committee members as you can see in the CTN video (starts at 3:54:30 on the time code). Senator Frantz did a good job of bringing out the estate tax law affects the Greenwich real estate market.

[You can see this post with the charts in the proper position in the text at GreenwichStreets.com.]

Good morning Senator Fonfara, Representative Widlitz, Senator Frantz, Representative Williams and members of the committee. Thank you for the opportunity to testify this morning in favor of S.B. 367 – An Act Concerning the Gift and Estate Tax.

My name is Mark Pruner. For a little background on me I have lived in Greenwich, Connecticut for over 45 years. I have an economics degree from Dartmouth College and a law degree from SMU. I follow the real estate market closely, particularly in Greenwich, and am regularly quoted in publications such as the Wall Street Journal, New York Times, Forbes, the Greenwich Time, Bloomberg/Businessweek and other publications on the state of the Greenwich’s real estate market.

II.     The over $10 million real estate market in Connecticut, buyers and the gift tax

B.     The prospective homeowners for these listings are extraordinarily sensitive to the Connecticut tax regime. The high income/high net worth individuals that can afford these homes rarely make a decision to buy a $10 million plus property in Connecticut without consulting with their tax advisers as to the effect that moving to Connecticut will have on their tax situation. When they do consult their advisers the differences from the federal tax regime are pointed out, particularly that Connecticut is one of only two states in the entire country that has a gift tax that is not coordinated with the federal tax.

Of the 52 total listings in Connecticut 50 of them are in Fairfield County. Zillow has homes listed for over $10 million in Darien, Norwalk, Westport, Fairfield, Redding, and Ridgefield.

III.   Sales Activity Drops Dramatically Over $3 Million Where Gift and Estate Have Most Effect

The effect of Connecticut’s gift tax is felt most acutely by those very high net worth individuals that can buy a $10 million house but most homeowners with homes over $3 million dollars are concerned about this tax. You can readily see by the difference in the lower end and the upper end of the Greenwich market. Below $2 million we have a hot market in Greenwich with less than a 6 month supply of houses, above $3 million sales slow dramatically. In these higher price ranges months of supply are measured in years not months. 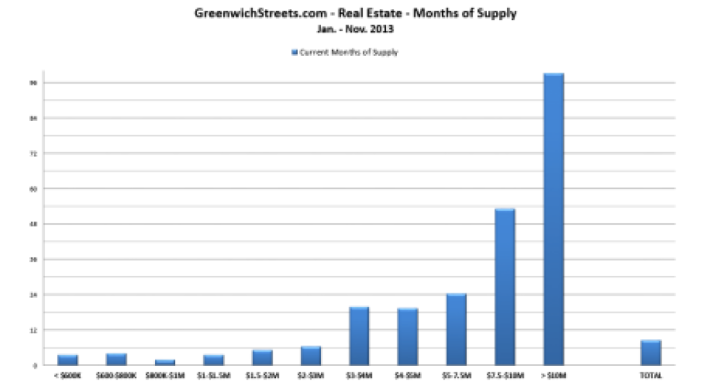 This chart shows the sharp jump in months of supplies as prices move higher. In New York City these price ranges are much busier with record sales being announced regularly. Connecticut is not getting its share of high end buyers and a unique and punitive gift tax is not helping.

IV.   Sales in Greenwich Change Dramatically with Even Slight Changes in Taxes

In the past three years there have been two major spikes in sales as sellers have rushed to avoid higher taxes.

A.     In June 2011 Greenwich recorded the most sales ever in one month as sellers closed early to avoid a 0.25% conveyance tax increase passed by the Connecticut Legislature effective July 1, 2011.

B.     In December 2012 Greenwich had the highest sales ever in the month of December as sellers tried to avoid the 3.8% Obamacare investment tax on sales after January 1. 2013.  Sales normally peak in June of each year, but sales that December were the highest for the entire year as sellers scrambled to close before year end.

C.     Legislative uncertainty has the opposite effect resulting in decreased sales. Sales in Greenwich nosed dived in September 2013 as the US Congress let the federal government shutdown. Some deals were cancelled, but most were shifted into the fourth quarter and resulting in impressive sales in the last quarter of last year.

Clearly even small changes in taxes or fear of legislative action have a major impacts on real estate sales.

A.     The Hedge Fund Capital of the World? – Connecticut was known as the hedge fund capital of the world prior to the Great Recession. Billions of dollars of investments from around the world were managed out of Connecticut offices. It is arguably Connecticut’s largest industry and one of its biggest taxpayers. Today, Connecticut has lost momentum. Many of the hottest new funds are being set up in New York City or even Miami which is actively campaigning for more funds to move there.

Passage of S.B. 367 and coordinating the estate and gift taxes with federal tax law would put Connecticut right back on top. Connecticut has lots of natural advantages we just need a statement that our governments wants to see the investment management industry expand in Connecticut.

B.     Mayor deBlasio – A curious thing happened in Greenwich real estate in 2013. In the first seven months of the year only 3 houses went to contract for over $10 million dollars. All of a sudden starting in August, 8 houses went to contract over $10 million. The change was Mayor deBlasio becoming the leading candidate for mayor on a platform that promised higher taxes on those earning over $500,000.

This was the push that people who had been looking in Connecticut but not buying needed to get them to sign contracts for high-end homes. Unfortunately for Connecticut, the “deBlasio effect” as it was called petered out as people took a wait a see approach. Since the end of October only one other Greenwich home listed for over $10 million went to an executed contract. A dramatic gesture such as coordinating the Connecticut estate and gift tax with the federal gift and estate tax would dramatically increase investment in Connecticut.

C.     Governor Cuomo – Governor Cuomo has proposed coordinating New York State estate law with the federal gift and estate tax laws. If he were to get this bill passed Connecticut would be at a serious disadvantage in competing for high net worth individual.

At the present time Connecticut’s $2 million unified gift and estate tax exemption is double New York’s $1 million dollar. Beating New York to the punch would result in a large number of high net worth people moving to Connecticut. Whatever revenues are lost in a coordinated tax would most likely be made up by income and sales taxes and the goods and services purchased.

The time is now to make Connecticut a leader again, and fill its empty office buildings with good paying jobs that generate the taxes that Connecticut needs to fund the programs for all of its citizens.

Please click here for the interactive map of the Open Houses and see below for the static map.

Thanks to Rob Pulitano for preparing the list of Open Houses and the interactive map and to Pam Toner for the hot links and the Word document attached and to Mark Pruner for the market analysis below. The Word document prints out nicer if you are looking for something to take with you in the car.

The Static Map is below. Please click here for the interactive map.

There are 30 Open Houses on Sunday. The spring weather is showing market support with warmer temperatures predicted. Also, remember to spring your clocks forward at 2:00 a.m. Sunday morning. You will lose an hour of sleep, but gain hours of daylight.

January was a torrid month for buyers with lots of folks out looking to buy before prices and interest rates went up. This buyer interest continued into the first part of February and then as the Super Bowl came around buyers weren’t so sure that interest rates were going to inexorably rise throughout 2014 as the climb stalled and rates started to fall. The result was  record January sales followed by good February sales for a total of 79 single family homes sold through Friday 3/8/14 as reported on the MLS.

At the other end we have had 11 sales under $1 million and an additional 14 under contract. We’d have more if we had more inventory.  So stay tuned to see what will happen this year.

What a difference a week makes! Last week spring temperatures and this week we are back to winter temperatures with a Monday winter storm in the forecast.  The Greenwich Real Estate Professionals will not be deterred. Please look at the times closely when planning your visits.