March 2017 was a good month for sales with sales up 58% over last year. We had 52 single family home sales in March which was up by 23 sales over March 2017. Sales were concentrated from $1 – 3 million with 30 of the 52 sales falling in that range.  Our contracts were down slightly from 93 at this time last year to 83 this year, but this is to be expected when you have so many sales.

Our inventory was also down slightly from last year with 567 house listing, but this was a very nice rise from February when we only had 475 listing. We have 33 listings under $1 million with most of these on the west side of town, which makes for very tight supply. Under $800,000 we only have 15 listings and when you annualize the sales we had in March we have less than a 2 month supply of inventory. 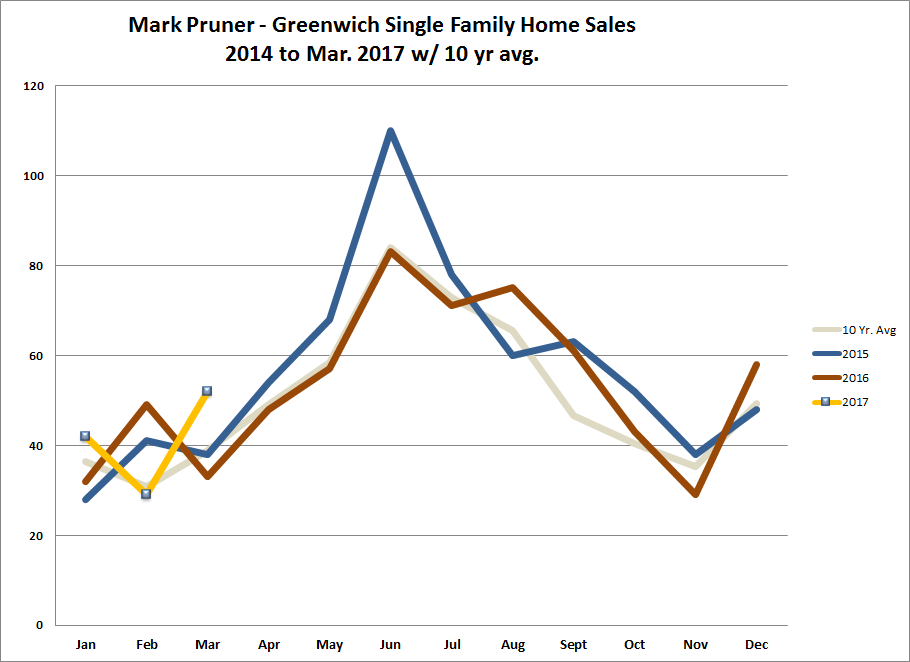 Overall March was good news for sellers with sales up, inventory down a little and months of supply down significantly from last March. When you look at the individual price ranges and neighborhoods there is a much more nuanced story to tell.  For example, from $4 – 5 million our inventory was up 9 listings, contracts were down 3 and sales were flat. Sales are also not evenly distributed throughout the town.

The dramatic jump in March sales follows just average sales in February and is more in line with our traditional average with low sales in February bracketed by a good January and March, which was not the case in 2015 and 2016. January often has good sales as people want to move their capital gains into the next year to put off paying taxes to the following year.

March also traditionally has had a rebound as the financial community spends their year-end bonuses. As more bonuses are given in stock and deferred compensation this spring bump up has been smaller and we see the same thing this year. We did have four March sales between $5 and 6.5 million, but we didn’t see a similar jump over $6.5 million where we have 96 houses in inventory and only four sales YTD. 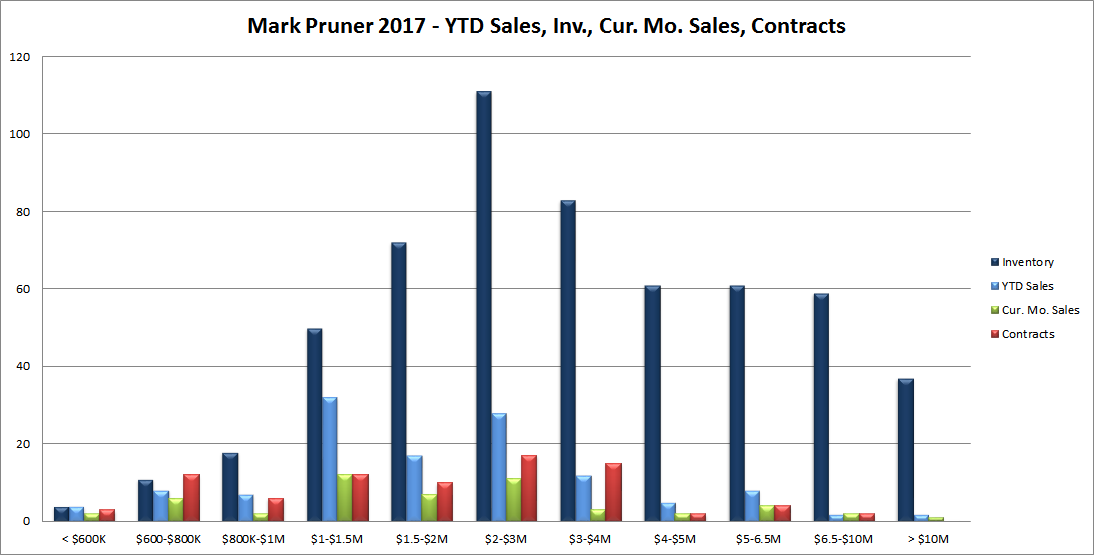 The good sales from $5 – 6.5 million make that price category a stand-out in the high-end market. We have had 8 sales and with 4 contracts this price range has kept pace with the inventory coming on the market. This is the only high-end price range with less than 2 years of supply.

When you look at the market in segments our market under $1 million is 6% of our inventory, but 14% of our sales and would be higher if we had more inventory. Houses in this price range that don’t go to contract in less than 60 days usually have some issue or another that is slowing their sale.

In our mid-market from $1 – 3 million our inventory is 41% of our market and our sales are 62% of sales. Above $4 million we have 53% our inventory, but only 24% of our sales. One promising area is the contracts from $3 – 4 million where we have 15 contract waiting to close so we should see a good April for this price range.

So, over all the first quarter is looking good. Sales YTD are up 13 sales from 2016 to 135 sales. We have a good number of contracts and we are finally getting the fresh inventory we need.

High-End Open Houses: Buyers are busy, but then so are sellers. Last weekend we had over 100 open houses or almost one out of every five listings on the market were open to the public. One reason we had so many open houses is that we are seeing open houses at the high-end. Of the hundred plus open houses last weekend, sixteen were over $4 million dollars.

Owners often fear that a bunch of unqualified, house voyeurs will show up to gawk, but this very rarely happens. What’s interesting is how self-selecting the people who come to these open houses are. To the extent an agent can ever know, these open house attendees look and sound qualified. High-end open houses get only a handful of open house attendees, but they are often worth doing and they do not open the flood gates to hordes of people. As a result, open houses are becoming a useful tool to market these homes.