April was one of those months where you could look at the glass as half full or empty. Our inventory was slightly down compared to last year with 631 listings down 12 listings from last year making for more of a seller’s market.

We also were down for sales in April as we had 29 sales this year compared to 35 sales last year making more of a buyer’s market. For year we were still up in sales with 155 sales YTD compared 133 sales or an increase of 17% over last year. 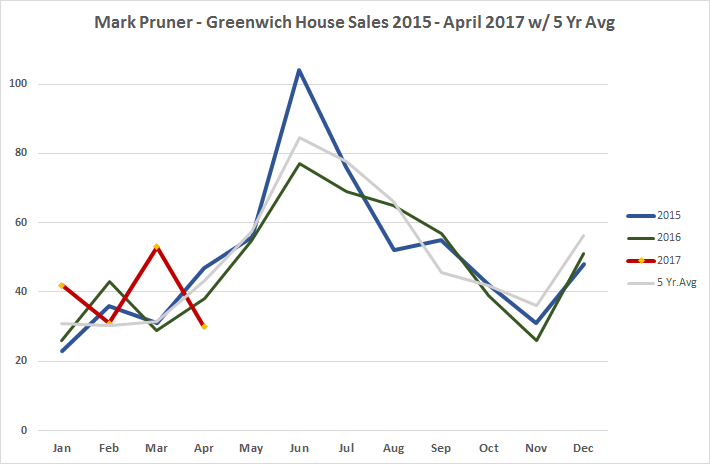 What was clearly different however, is that last year at the beginning of May we had 135 contracts pending and this year we only have 92 sales pending. So contracts are down about a third from where they were last year. This doesn’t bode well for sales in the month of May as we have fewer contracts ready to mature into April sales. Of the decline of 43 contracts from last year and 40 of those contracts are in the heart of our market from $800K to $3 million.

On the flip side, the good news is that our market from $5 to 6.5 million is doing well as inventory is down by 11 houses while sales are up by 7 houses for the. As a result the months of supply is down dramatically by over 4 years of supply to less than two years of supply. This is really good news for that one price range. Unfortunately, above that price range sales are not doing well. Above $6.5 million we only have four sales with two contracts pending in a market where we have 100 listings. 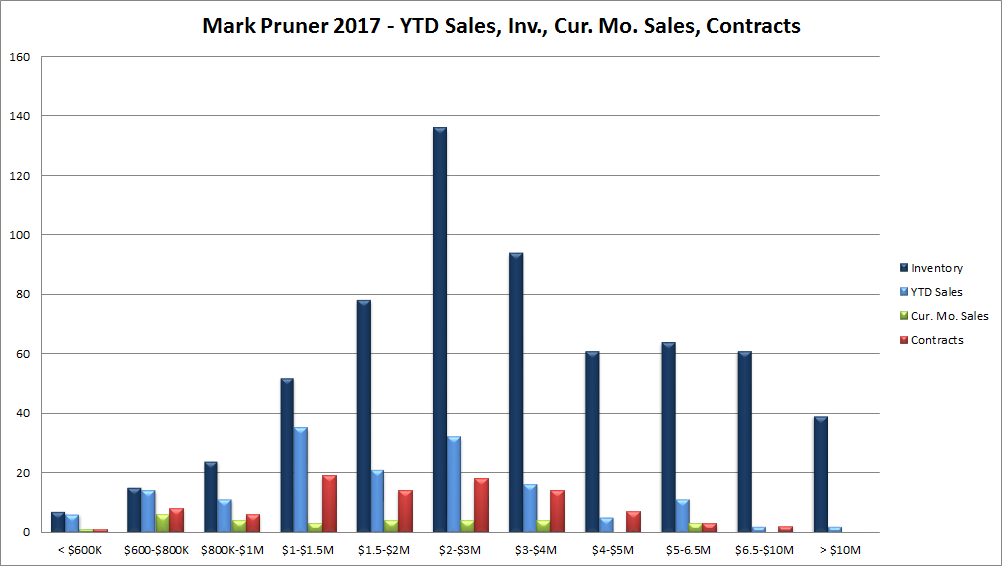 The high-end market gets a lot of attention, because Greenwich is one of the few places in the US where there is a significant inventory above $5 million. At present, we have 164 listings over $5 million. Contrast this with our adjacent city in lower Fairfield County, Stamford, where in 2016 only eight houses were sold above $2 million. In the Town of Greenwich in the first four months of this year we have sold 68 houses over $2 million.

Now generally, I cut the months of supply chart off at 4 years of supply, because anything over 4 years is just a lot of excess supply compared to market demand. This scaling, however, doesn’t show just how good the $5 – 6.5 million market is doing which is right at 2 year supply.

Buyer’s concern about the interest-rates has led to a whip saw effect as in February people rushed to sign contracts that closed in March. This led to a very good March. Then when interest rates didn’t continue to rise. Buyers backed off as there was no need to close immediately. The result has been a significant seesaw effect as January was good followed by a bad February and then March was excellent and April was below average. Our marketplace is driven by how the financial industry is doing, how the stock market is doing and the perception of rising interest rates.

The stock market did well and then has leveled. Interest rates went up and then went back down and really took the urgency out of the market. With the increased inventory that is normal for this time of year the anxiety about rising interest rates has ameliorated.

Overall though we are up 22 sales over last year and inventory is down 12 listings. Our months of supply is down 3 months, so if you get rid of the chatter we are seeing from month-to-month 2017 is doing better than 2016.

The future as has happened in the last three years is unpredictable. There was hope among some that with the election of President Trump that there would be a strong positive economic trend, however, so far this year we’re seeing markets driven by interest-rate’s and the perception of interest rates going up or declining. At the moment, the sentiment seem to be that interest-rate won’t be changing significantly and so people are waiting for just the right house, which means if interest rates do head back up then some folks are going to feel left out.