For the last three months we’ve had a real estate market that we haven’t seen post-recession; a good high-end and a mediocre middle. September took that up a notch. First the poor news, from $600,000 to $3 million sales are down. Under $600,000 we have no inventory. (Well, OK we do have three listings, but we had 8 listings last year). The demand is certainly there as even with this lower inventory we have the same 13 sales that we had last year.

Between $ 6 and 7 million our inventory is down by a quarter and sales are up by 500%.  That calculation came from my fellow agent, Jill Marchak, here at Berkshire Hathaway, who does the internal market numbers for our Greenwich offices. The percent increase was so surprising that she initially thought it must be wrong, but sales really did go from an anemic 2 sales last year to 12 sales this while inventory dropped to only 20 listings even though this is the peak of fall market.

Unfortunately September 2017 was the third consecutive month of below average sales numbers and have cancelled out the good sales months we saw earlier this year. We are now down 5% in total unit sales year to date. Despite this drop in the number of houses sold, however, we are up about 5% in sales volume as these increased high-end sales have powered the total dollar value of all sales upward.

As I mentioned this time last month, September was likely to be a down month as contracts were down 29% year over year. This month contracts have recovered very nicely with contracts down only 3 houses when compared to the beginning of October 2016 or 4%. One of the places contracts saw a nice recovery was our busiest segment from $1 – 1.5 where we are actually up to 15 contracts which was 4 more than in early October last year.

The only major drop in contracts was from $600,000 – $800,000 where we are down 7 contracts from 13 contracts last year to only 6 contracts this year for that price range. With only 20 total listings I wouldn’t expect that category to be recovering quickly.

The mood in the marketplace varies but one thing that seems to apply across a broad range of prices is that buyers are just being more thorough. They are going to more open houses and feel that they have to see everything in their price range to make sure that haven’t missed anything before they put in an offer. All this research and legwork does mean that when something new comes on that they see as a good value, buyers can move quickly. Of our 491 sales and pending contracts so far this year 101 of them went to a binding contract in less than a month.

When you look at our months of supply what is generally a smoothly rising curve from only a few months of supply under $600,000 to many years of supply over $10 million is not smooth this year. We actually have a stair step arrangement with $1.5 – 2 million being a transition zone from a seller’s market to more of a buyer’s market. Activity at the $2 million dollar range which is usually more than at higher price, this year is about the same as around $4 million.

From $4 – 5 million we have about the same supply and demand as last year which works out to be about 24 months of supply. Then we meet the high-end sweet spot that has expanded from $5 – 6.5 million to go all the way up to $10 million. When you throw in the 4 contracts from $6.5 – 10 million we actually have a busier market from that lofty price range than we have from $4 – 5 million.

At the high-end the steadily rising stock market seems to be really helping out as people look to diversify their portfolios and take some of their gains off the table and put them in real estate. In the middle, the bread and butter of Greenwich’s real estate market, our state legislature is sowing doubt and confusion (and Washington isn’t helping either.) 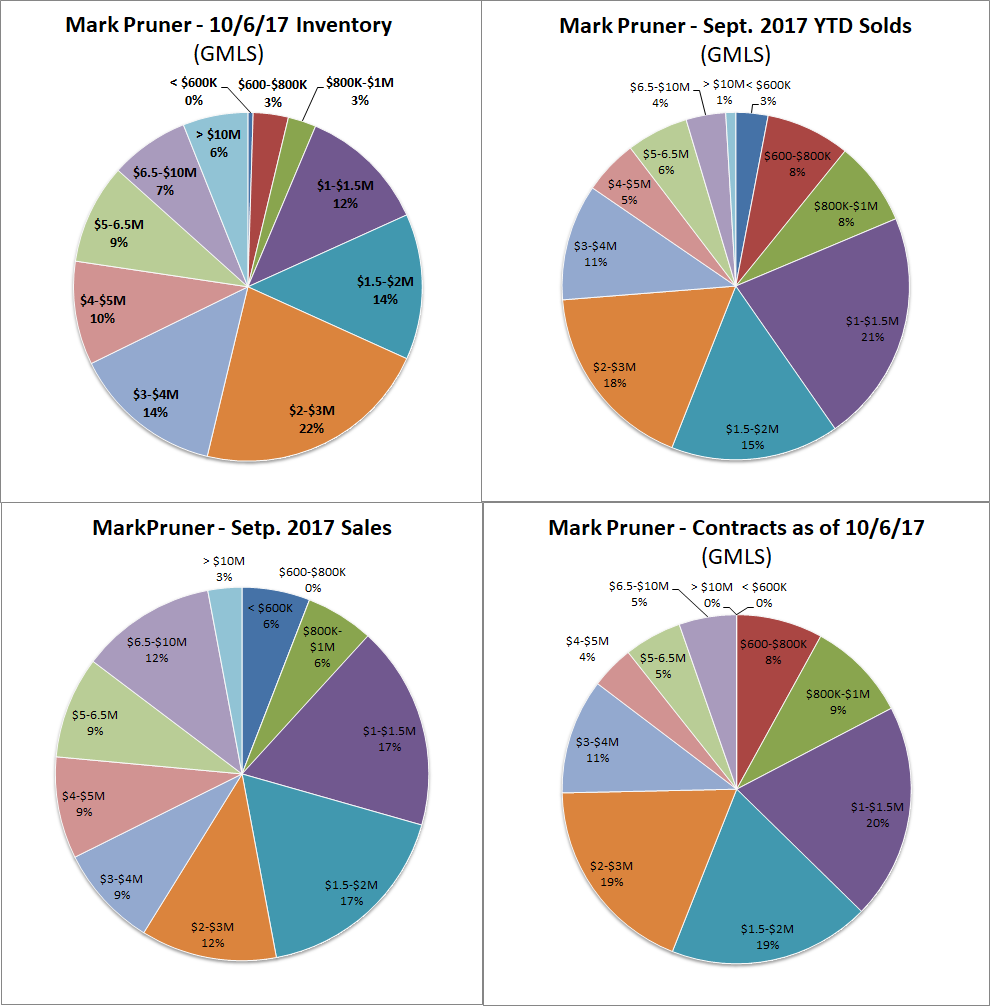 Our contracts indicate that October should be a return to more normal sales, not the nearly 40% Y-O-Y drop in monthly sales that we saw this September. If the Connecticut legislature and the governor can get together on a budget deal, we still have a good shot at an excellent 4th quarter, but if we get past this week without a budget, the fourth quarter will be a struggle. I’m hoping for the best.

If you look at the sales year to date some interesting numbers emerge. As of the end of September we had 434 sales down slightly from last year. The most sales were in the South of the Parkway area that runs from the Parkway all the way down to the Post Road so you would expect that area to have the most sales. The second and third most were in Riverside and Old Greenwich which are seeing a disproportionate number of sales given the number of listings.

North of the Parkway still retains the highest average sales price at $3.54M, but it also has the lowest appreciation (actually a depreciation of 15%). The way the appreciation is calculated here is to take the sales price and divide it by the assessment and then divide that by 0.7 (the town’s assessment ratio).

The assessment is supposed to be 70% of the fair market value of the property as of October 1, 2015. So, what we are looking at is two years of price changes in the “Appreciation” column. Whether you have a low appreciation or a high appreciation you need to take these numbers with a large grain of salt. According to this calculation houses that sold in North Mianus have appreciated 60% since 10/1/15 and they have not. First off there are only 6 houses that have sold in North Mianus this year and second and most importantly, these figures also include new construction and major renovations which throws these numbers out of whack. A better way to look at this “Appreciation” is to use it as an indicator of where the most activity is.

Pemberwick has the fewest days on market and also the next to lowest average price, which you would expect to go together. Pemberwick also has the smallest average house size at 1,618 s.f. Backcountry, as you might expect is at the other end of square footage with the average house there being 6,336 sf.

Backcountry Greenwich gets a lot of attention in town for its 4 acre zoning and some very high sales prices, but there is another area in town that is similar, has more sales and for the moment a higher average price and that is the 2-acre zone. The RA-2 zone runs along the south side of the Merritt Parkway about halfway down to the Post Road. It also includes three small areas; a section just west of the Merritt Parkway on the NY border, the area around Field Point Circle and an area on Mead Point. These last two areas account for some major high-end sales, but in any given year only contribute a handful of sales. So for most purposes the 2-acre zone is a stand-in for upper mid-country.

In the RA-2 zone the floor area ratio is 9% versus 6.25% for the for 4-acre zone. This means that the above ground portion of the house is limited to 9% of two acres or 7,841 s.f.   The FAR does not count the size of the basement, so developers these days include a fully finished basement often with 10-foot ceilings. The size of the resulting structures is usually in the 8,500 s.f. to over 10,000 s.f. Given that only 16 out of 437 houses that have sold this year are larger than 10,000 s.f. the bottomline is that most people can get a house as big as they want in the 2-acre zone. 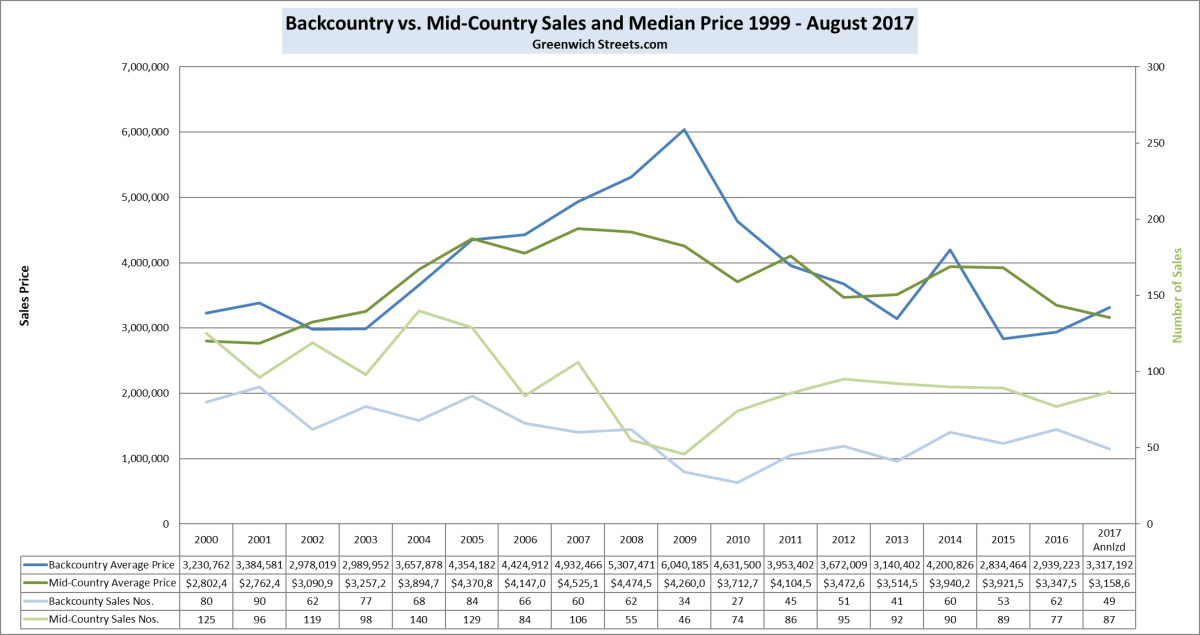 The 2017 average priced house in the RA-2 zone is $3,158,622 this is down from  $3,347,559. The least expensive house in RA-2 zone sold so far this year sold for $935,000 for a house on a non-conforming 3-acre lot, while the highest sale was for $13,065,000 for a house on an 8.1 acre lot on Meadowcroft Lane. We are seeing an uptick in demand for the 2-acre zone as some people who pre-recession might have bought in the 4-acre zone north of the Merritt Parkway now want to live closer to town on somewhat smaller lots and the 2-acre zone meets their needs.

The average price for a single family home in the RA-2 zone in 2015 was even higher at $3,921,555, but this apparent drop in the value of house in the RA-2 zone is more attributable to the change in the mix of what is selling rather than a drop in all house values. From year to year each individual price range may be up or down resulting in change in both the average and the median price.

These very large sales can significantly distort averages from year to year. The one exceptional sale that show this is the sale of Copper Beach Farm, a 50 acre estate on Long Island Sound that sold for $120,000,000 or more $80 million more than any other residential property in Greenwich. That property has been excluded from this analysis as including it would have single-handily raised the average sale price of all RA-2 sales for 2013 by $1.3 million.

The problem was not a lack of demand for new spec homes. New houses in the RA-2 zone sold for an average of $90/s.f. more than previously occupied houses in that zone so people were willing to pay a premium for new homes. The problem has been financing. Getting financing for owner-occupied housing has not been a problem, but it has been for speculative houses.

Overall demand in the RA-2 zone has been good all the way up to $6.5 million. Generally, we see months of supply rising from the lowest to the highest priced home going from 3 – 5 months of supply under $1 million to several years of supply over $10 million. (see Appendix XII.B. below.)

In the RA-2 zone we see a similar pattern with one anomaly. Sales from $4 – 6.5 million in the RA-2 zone are doing particularly well in the 2-acre zone and as they have in the rest of the town. The steady rise in the stock market over the last 12 months, regularly setting new record highs, has encouraged buyers with substantial portfolios to buy this year. Sales have climbed through the year in the high-end price ranges as the year goes on.