October was a better month for sales than September with sales returning to their 10-year average. In addition, we continue to see strength in the upper end of the market above $3 million.

October also continues our tradition this year of see-saw sales with alternating up and down months. Unfortunately, this see-saw effect has been taking place around a lower average. As of the end of October 2017 we have sold 470 houses compared to 552 sales last year. Only January and March of 2017 saw higher sales this year compared to last year.

Now, on the good news side, we should see an improvement for November sales. As of the end of October we had 89 contracts waiting to close compared to only 70 in 2016. Contracts are up in every price category from $800,000 to over $10,000,000 with the one exception of $4 – 5 million where they are down 3 contracts from last year. 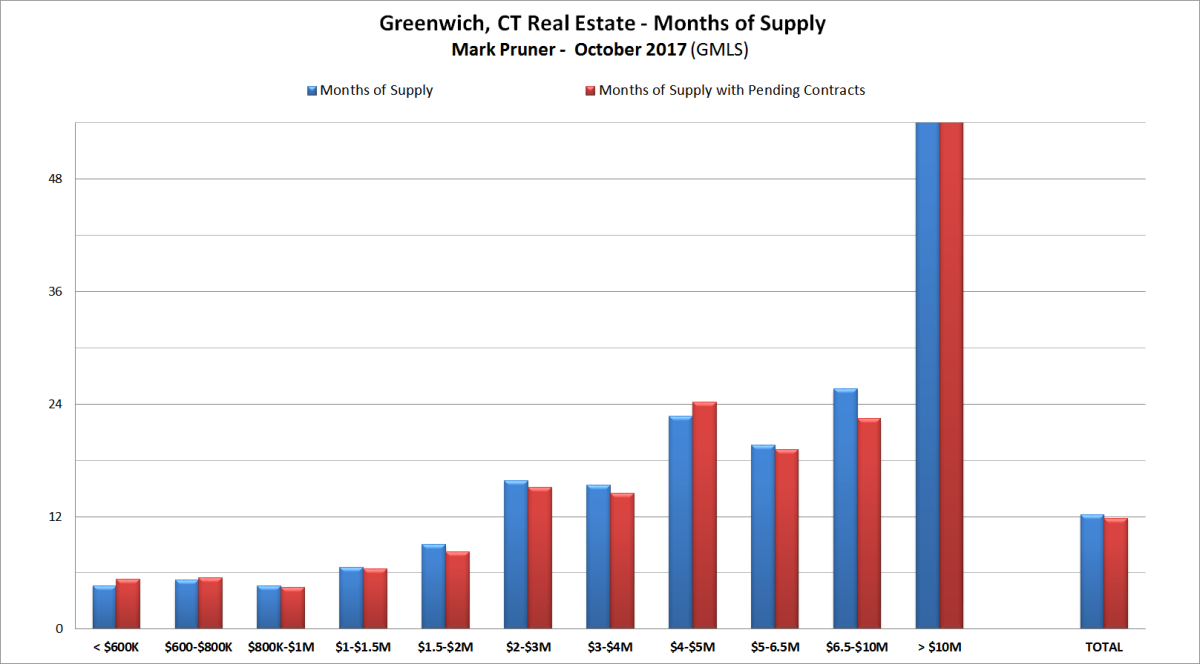 Now even in this competitive market you if you overprice a house it will just sit. Our lowest sales price to original list price in this category was 78% and that house stayed on the market for 539 days. Three other houses sold at around 84% of original list price and all three stayed on for over 300 days compared to a median of 75 days on market.

The U.S. House and Senate tax bills have several provisions that would have a disproportionate impact on Greenwich. The proposal to lower mortgage deductible to only the interests on mortgages that are up to $500,000 has been getting the most attention, but it is not the only provision.

At first glance eliminating deductions on mortgages over $500,000 would seem to be a big deal for Greenwich, since so far this year only two houses in Greenwich have sold for less than $500,0000. Now if you assume an 80% loan to value ratio on the mortgage that would equate to a purchase price of $625,000.  That higher amount doesn’t provide much help since only 3% of our houses have sold for less than that.

Fortunately, the other 97% of purchases will see significantly different impacts. Obviously if you buy a home for all cash this deduction is irrelevant. The higher the purchase price the more likely the purchase will be all cash. For many people this change may push them to borrow less.

The House bill also proposes a $10,000 limit on property taxes, so houses in Greenwich over $1.2 million will see their property tax deductions limited based on our present mill rate. This provision might actually help accelerate movement of downsizers from high property tax Westchester County to Greenwich. At the same time, it would hurt Connecticut’s national competitiveness against low tax states.

One big factor that was left out of the proposal; any changes in taxes on the carried interest taxation. While even candidate Trump complained about taxing these carried interests at capital gains tax rates, leaving this policy unchanged will help mean many of our residents and prospective residents.

Capital Gain on Sale of Residence

On the downside, there is a proposal to change the $500,000 capital gains tax exemption for personal residents from a 2 out of the last 5 year owner occupancy requirement to 5 years out of the last 8 years. In addition, the proposal includes a phaseout for those families earning over $500,000 so that if you earned over $1 million a year you would get no capital gains exemption. This change will push more people to rent rather than buy if they might occupy their house for last than 5 years.

Now the bottom line is that these are just proposals and we can expect substantial changes as this legislation goes through the Washington sausage making machine. In addition, the interaction of all of these factors is complex, with increased standard deductions, reduced tax brackets and dozens of other details impacting each household differently, so to say this will help or hurt any particular Greenwich residents you just can’t say.

So, contracts are up, we have a Connecticut state budget that is better for Greenwich and we’ve got tax changes proposed in D.C. Things will continue to change and only the future can tell what will happen.