Taxes drive a lot of the Greenwich housing market. The general consensus has been that the higher priced the house the more taxes are a consideration in buying or selling. This market however is showing that the 2017 tax cut and SALT limitation may actually mean that tax consideration are having a greater impact at the low end. 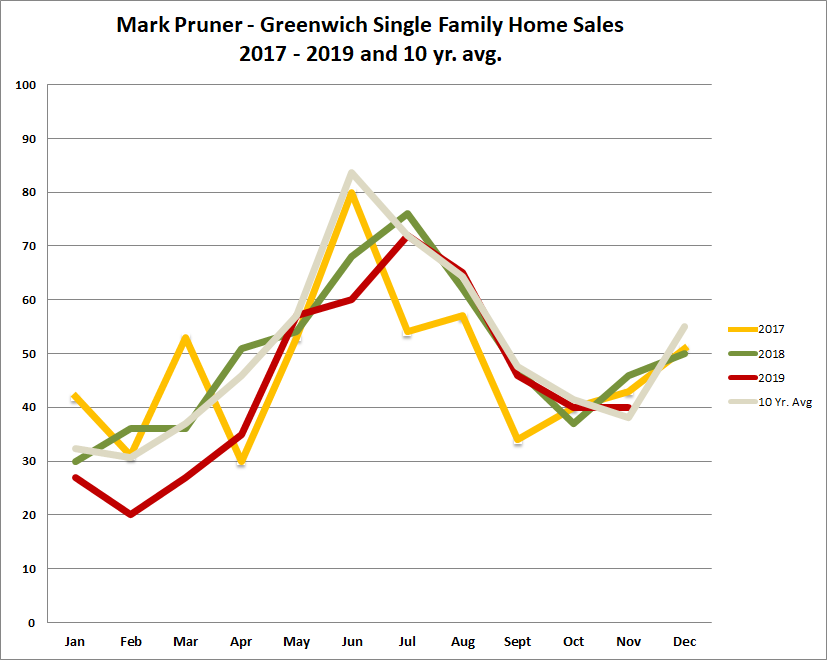 As for sales, November was a little better than our 10 year average with 40 house sales compared to our 10-year average of 38 sales. After the bad start we had in the first half of the year any improvement, even 5% bump in one month is a nice plus. This bump up in sales in November sales was somewhat expected since October contracts were up 4% compared to last year.

This is the third year in a row that our November sales have beat our 10 year average. This may be indicative of sales happening later in the year as many financial firms no longer pay bonuses at the beginning of the year. This is the second year that our peak sales month was shifted later by a month. This year and last year, July and not June, were our highest sales month for the year.

It looks like a stronger second half will not make up for the weak first half of 2019. We have 490 sales so far this year which is down 50 sales year-to-date or 9% lower sales. With contracts presently down by 12% we are very unlikely to catch up to last year’s 593 sales by the end of December.

But back to those taxes I was talking about before. You might expect that the 2017 Tax Cut and Jobs Acts’ elimination of the deductibility of the state and local taxes (SALT) over $10,000 would have their greatest impact at the high-end of the market, but that is not what we are seeing. Our median sales price so far this year is $1.89 million, which we’ll round off to $2 million for this analysis. If we look at sales, contracts and inventory below $2 million we see that sales are down 23 houses, contracts are down by 8 deals and inventory is up 20 listings. Below $2 million we are seeing a weaker market this year than we saw last year.

This is particularly bothersome below $1 million where we are usually supply constrained. Last year sales from $800K to $1 million took a big jump as for once we had enough inventory to meet demand. The result was that sales were up 49% to 64 sales in that price category last year through November 2018. This year we only have 44 sales in that price range.

If we go back one more year to 2017 under the old tax law our sales are about the same, but our inventory was less in that pre-tax cut year. It seems we have more people that want to sell and fewer people that want to buy in 2019, making for a weaker market.

Our under $2 million single family home market is primarily a young family market with some Westchester downsizers also. Both of these groups are particularly sensitive to increased costs from the loss of SALT deductibility. (BTW: If you want to do your own analysis of any of this, all of the monthly tables and charts, that can’t be fit in the Sentinel, are up at my blog, GreenwichStreets.com, going back to 2013.) 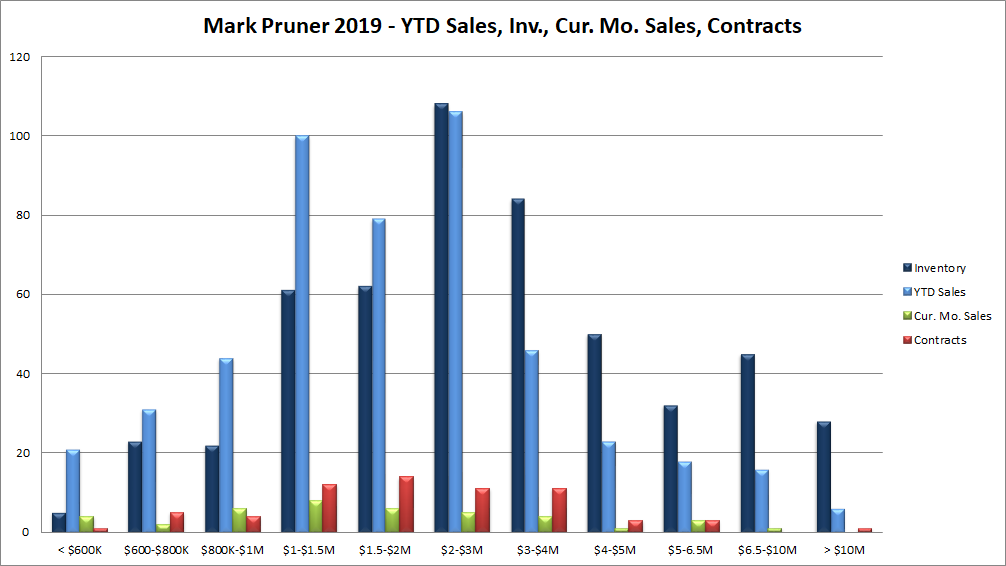 So, the 2017 TCJA may be making our under $2 million market weaker, what is it doing above that price? Just above that price, our $2 – 3 million dollar market is a transition zone where sales are up 7% and inventory is down 5%.

Without talking to lots of the buyers and sellers it’s hard to say what’s driving these two markets. We are seeing lower sales across the board with two notable exceptions. Under $600,000 sales are up 47%, from 12 sales in 2018 to 21 sales in 2019 YTD. This shows we still have good demand for houses under $600,000 in Greenwich. Interestingly, this is also the price range where many buyers will be below $10,000 in SALT so they won’t be affected by the cap.

The other price range that is doing better this year is the $6.5 – 10 million price range. In that price range sales are up 78% from 9 sales in 2018 to 16 sales in 2019. Here what may be driving sales are some very large price drops in what were houses that would previously have sold for over $10 million.

Over $6.5 million we have had 29 house sales this year. This is up from 5 houses from last year. (To be clear, 5 of those 29 houses listed above $6.5 sold for less than $6.5 million) For these 29 sales, the median sales price to original list price ratio was 82%. This ratio is lower than the 89% for the whole market, but it is actually better than historic high-end SP/OLP ratios where high-end original list prices were often set with extreme optimism.

Of these 29 high-end sales the median year built was 1990 and only 2 of them were new construction. It’s a tough time to build high-end spec houses as we have 73 competitors and a couple of years of supply of houses on the market.

So, what’s likely to happen? Based on contracts being down, December has a good chance of being a mediocre month leading to sales for the year being down and also prices being down, though not as much as the pundits thought in their mid-year reports.

One wild card is that the new Qualified Opportunity Zones give people who have huge capital gains locked up in their houses or in the stock market a way to shelter these gains. For most people in Greenwich who bought before 1990, the Obamacare additional capital gains tax of 3.8% will kick in on the sale of even a modest house. A QOZ fund or QOZ company is a way to delay this tax for 7 years while not paying any capital gains on the return on their investment. QOZ funds may start playing a bigger factor for our downsizers allowing them to sell earlier.

One of the more innovative QOZ funds was created right here in Greenwich by Belpointe Capital. Their Belpointe REIT is publicly traded on the OTCQX with minimum investments of $100. You’ll still need to hold your investment for 10 years to get all the tax benefits, but it does provide a low entry price, low load and liquidity. Downsizers may not want to lock up their funds for a long time, but it is one solution for those folks that previously might have waited for the step-up in basis granted under the estate tax, which helped their heirs, but not the homeowners themselves.

As to the new year, recession fears seem to be fading so 2020 is looking up at the moment.