Neither worries about the coronavirus, nor a record stock market slump dented the Greenwich market in February 2020. Our 30 single family home sales in February 2020 were 50% higher than the 20 SFH sales we had in February 2019. To make things look even better, we had 75 contracts at the beginning of March 2020 compared to only 51 contracts in March 2019.

As I noted in my January report there seems to be a new urgency in buyers to actually get deals done. My new listings are getting regular showings and two listings have accepted offers including a land listing that got multiple offers. Now you might think that, since the stock market didn’t correct until the last week of February, that a last week market slump is being disguised by the three previous weeks, but that is not the case. We had as many contracts and sales in the last week of February as we had in each of the other three weeks and the last week was actually better than one of the weeks. The pace of transactions is also continuing in the first couple of days of March. 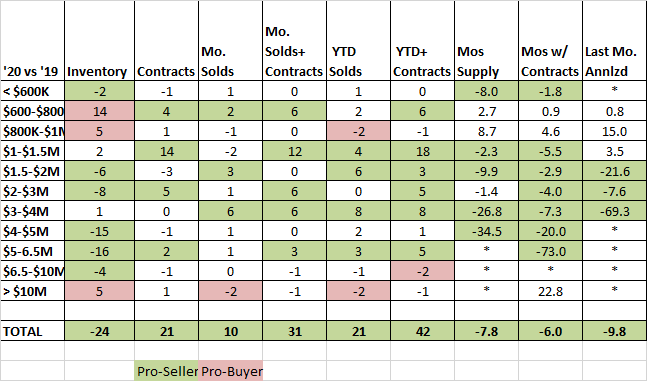 This increase in sales is despite a slower than normal start of new inventory coming on the market. We are down 24 houses from last year, which is only 4.5% lower, but you would think with February 2020 being the first February without measurable snow in Central Park, that we would see more houses coming on to take advantage of the good weather and increased sales, but you’d be slightly wrong. 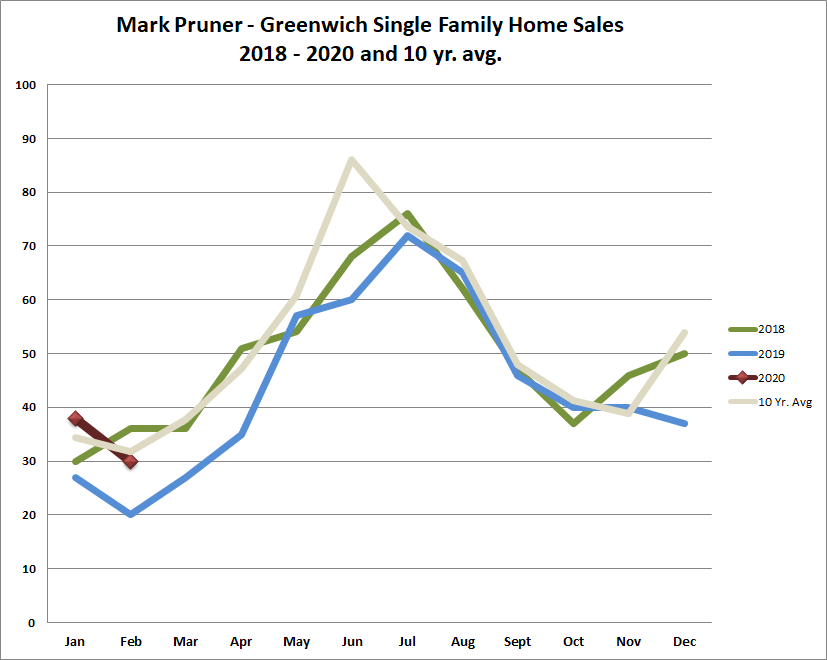 When you look at the bottom line, all of the numbers show a movement to a seller’s market. Inventory is down 4.5%, year-to-date sales are up 50% and contracts are up 39% resulting in a drop of months of supply of 34%. What could be better for sellers? There is only one fly in the ointment, last year was not a good year for the Greenwich market, so comparing a decent year to a poor year will always make for a positive outlook. When you go back to 2018, those same year over year numbers are inventory down 2%, year-to-date sales up 5%, contracts down 16% and months of supply down 6%. So, 2020 is still doing better overall than 2018, but the story is just not as dramatic.

Part of what is fueling this year’s buyer interest is interest; interest rates that is. The Fed just lowered interest rates by half a percentage point in an emergency process not seen since 2008. The result is that the 10-year Treasury note is at record lows and the average mortgage rates for 30 year mortgages are under 3.5%. For the national housing market this is excellent news.

In Greenwich, the situation is a little more nuanced. Lower interest rates do push up sales, but so is having an expanding stock market portfolio. The market hit an all-time record high on February 12th. When people have stock portfolios that have grown, the temptation is to put some of these funds into real estate. You see this particularly over $3 million where most of our purchases are done without traditional mortgages. This has become even more prevalent now that the mortgage deductibility is capped at $750,000 down from $1.1 million in 2017. Interestingly, lower mortgage rates may still encourage real estate investments as bonds aren’t returning as much money as they did. 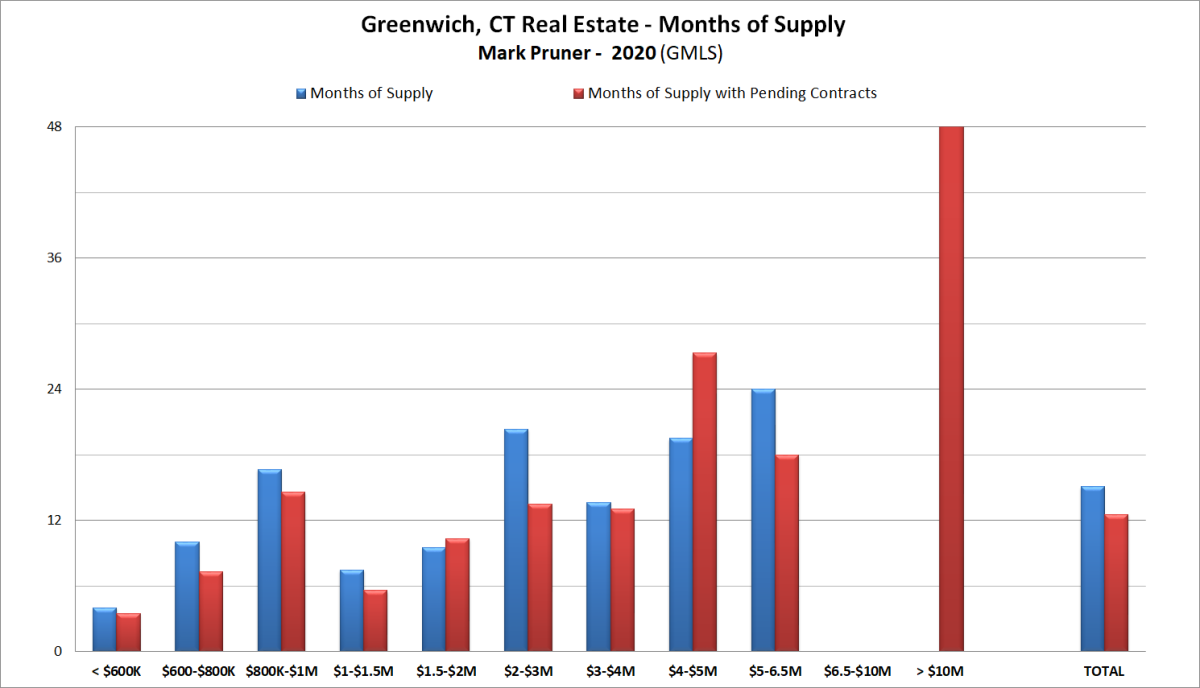 From $3 – 6.5 million our 2020 sales are up 117% from 6 sales last year (it was a bad year) to 13 sales this year. This even better than 2018 when we had 11 sales in that price range. Numbers like that don’t seem to make the mainstream press as evidenced by a Wall Street Journal article on Tuesday that said our market was “struggling” citing the same author’s story from April 2019 and ignoring what is going on this year.

Now she does have a bit of a point if you look at only the market over $10 million. There we’ve had no sale this compared to 2 sales in 2019. We do have 2 contracts for listings over $10 million compared to only 1 contract in 2019, but any way you look at it we are dealing with small numbers. We are also seeing very high-end sales move to later in the year, so on a percentage basis sales are down dramatically, the reality is a couple more sales and our numbers are up in the very high-end also. 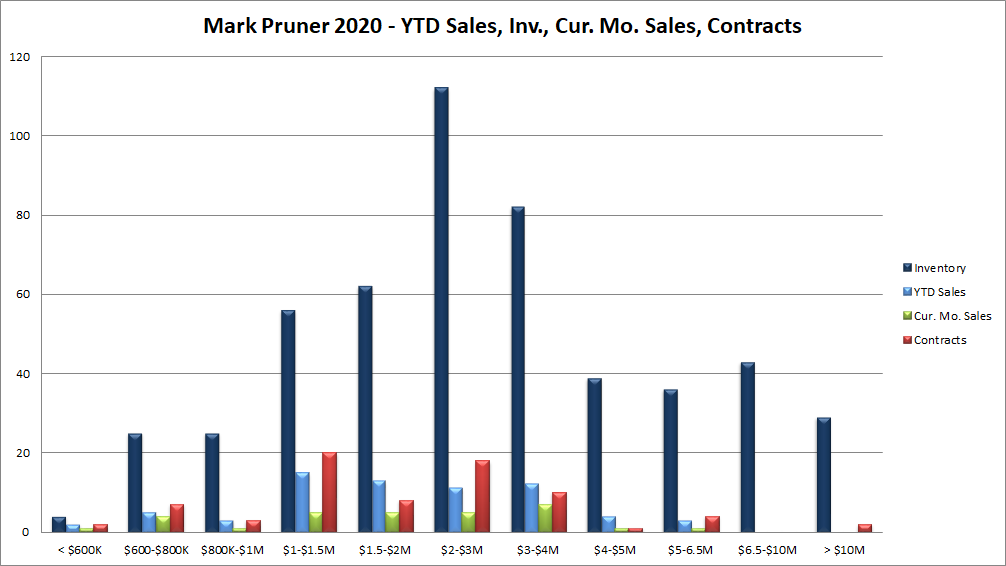 Our contracts are mainly distributed in the $1 – 4 million price range, which bodes well for these price ranges in March. We have a very volatile world and U.S. situation at the moment. We have a had good beginning, but we have factors pushing our market both ways, so stay tuned. At least the market won’t be boring.

3/7/20 Update – This article was written on 3/2/20, before any Covid=19 cases had been diagnosed in the New York Area. This week cases were diagnosed in Westchester County, New York and in Danbury, Connecticut. At the same time, the 10 year treasury note hit an all time low. The result was that even more people are looking to do transactions with sales and contracts increasing significantly in the first week of March.