Contracts were down at the end of June so July was not likely to be a stellar month and it wasn’t. We only had 71 sales reported by the GMLS last month. We’ll get a few late sales reported and seven to 10 private sales, but even if we get to 84 sales we will still be below the 98 sales in July 2013 and the 95 sales in July 2014. We will get to our 9 year average of 73 sales and June was a stellar month. With a little time shifting between months we have two above average months.

The good thing is we still have 103 contracts waiting to close. So August should look better than July.

Our inventory is slipping a little which is typical of this time of year, but in the price categories over $1.5M we have good supply.  What has been our super-hot category may go to just hot in August as we have more contracts from $1.5 – 2.0M than from $1.0 – $1.5M. We also have a nice number of contracts from $2 – 4M. So we will see the average sales price rise as more sales happen above our average sale price of $2.46M. Our median sales price is $1.875 which is a nice increase from last year. 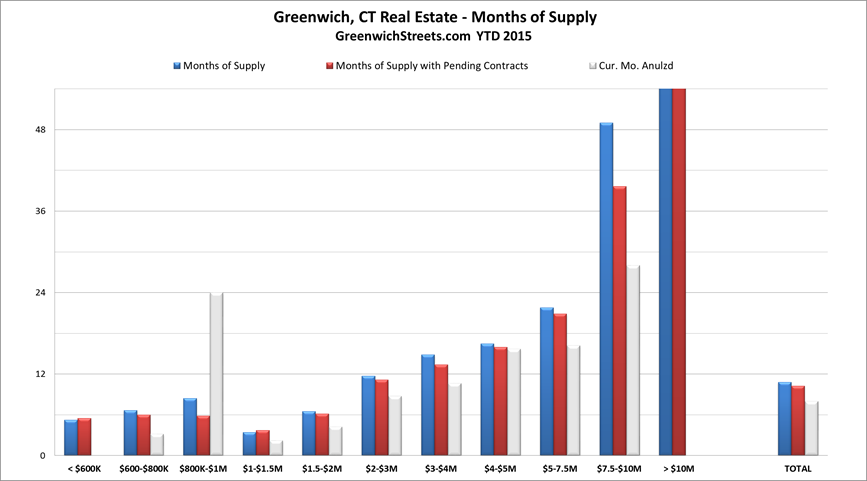 Even though sales dropped back to our 9 year average in July from stellar 2013 and 2014 July the sales distribution and demand stayed the same in most price categories. The main exceptions were the $7.5 – 10M and the $600K – 800K price range where July sales were 1 sale and 6 sales. Now the fact that one sale can get the annualized months of supply for July sales to drop 21 months shows just how slow this segment has been.