This will be a crucial year for high-end residential real estate. The first major rewrite of the federal tax law in decades has just gone into effect and the general consensus among the pundits is that it is not good news for the high-tax states like Connecticut. The reality is more complex than that and it might actually help towns with low property taxes like Greenwich, CT.

As to the deductibility of the Connecticut income tax that hits $10,000 for a married couple at about $198,000 of taxable income. Another way to get to the combined $10,000 is $5,000 each which would be a $600,000 home in Greenwich and a taxable income of $107,000 for a couple. Bottom line, just about everybody in Greenwich is going to find that that a portion of their state income tax and their property taxes are not deductible and for most people it’s going to be a big portion.

But what does this lack of deductibility mean in dollars and cents. Let’s take someone who has $30,000 of combined property tax and Connecticut income tax. For them the first $10,000 is deductible and the next $20,000 dollars is not deductible. To figure how much you extra you have to pay you just multiply the non-deductible portion by your marginal federal income tax rate. So, if your taxable income in 2018 is $200,000 you would be in the 24% federal tax bracket and that lost $20,000 in deductions would mean you would be paying $4,800 in extra federal taxes.

But would you really be paying this much extra? Lost in much of the conversation about lost deductibility, is that the federal tax rates have been lowered at each tax bracket and the amount at which each tax bracket kicks in has increased. In 2017, if your taxable income was $200,000 you were in the 28% marginal bracket and you would pay $42,623 in federal taxes. In 2018 with that same $200,000 of taxable income you are in the 24% tax bracket and you would pay $34,942 or $7,681 less in federal income tax. 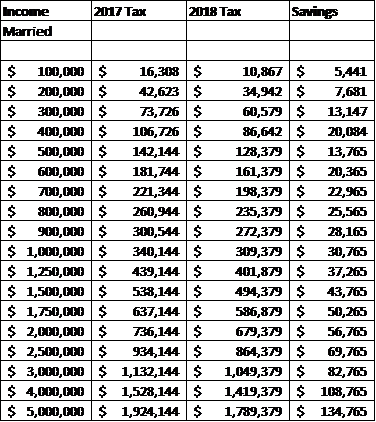 Now the Greenwich resident with $30,000 of combined SALT and property tax has to pay $4,800 more in taxes for the lost deductibility, but they saved $7,681 with the lower rates, so even in the high-tax state of Connecticut they will pay $2,881 less in taxes, because the reduction in rates and increase in brackets is greater than their loss in deductibility.

Now what I just wrote is not accurate and it is only roughly applicable to your tax situation. Federal taxes are incredibly complex and there are deductions, credits, exclusions and a myriad of other provisions that may or may not affect your individual situation. Also, all the rates are for a married couple just to simplify the analysis. All of the rates are different if you are single. So, to get a handle or your situation you need to talk to your accountant and/or tax lawyer.

What I am trying to show is that the lower tax rates and the higher bracket amounts may mean that for many people in Greenwich, even with the loss of deductibility of SALT and property taxes, that they will still pay lower taxes.

Now some folks will say that’s fine, but if I move to a low tax state like Florida, I get these lower federal tax rates and there is no income tax. This is true, but one thing to note is that many of these states have higher property taxes than in Greenwich, so it’s not an all or nothing choice. If you are thinking about moving consult your tax lawyer and your Realtor.

Of course, Greenwich has always had people who retire and move to Florida for the warm weather. So, the question is not will Greenwich homeowners move to Florida and other states, but whether the new tax law will result in a significant increase of people moving to these low tax states. For our retirees that were thinking about moving anyway, the answer may be yes, but for people with good jobs in the NY metro area and kids in school they aren’t likely to move.

The new tax law also has two significant provisions for families with kids. First, the child care credit was increased from $1,000 to $2,000 and it is a tax credit, so you get to reduce your tax bill by that amount for every child under 17. For many Greenwich families the equally important change is that the phaseout of this credit was increased from $200,000 to $400,000 so it not only doubled in amount, but will be available for many more Greenwich families.

Property taxes in many Westchester towns can be as much as triple what Greenwich property taxes are. In addition, the NY state taxes are slightly higher with a maximum rate of 8.82% compared to Connecticut’s 6.99%. Westchester retirees are one of the main sources of buyers in Greenwich. Once they retire having to pay these high property taxes out of their savings does not look so attractive and Greenwich’s low property taxes and excellent senior services look good.

As a result of the new tax law, I expect that we will see an increase in buyers from Westchester and they will be relocating at younger ages. Employed, empty nesters who are no longer tied to their children’s schools may well decide to move to Greenwich.

Westchester County also just got a new county executive. The prior county executive had held county taxes steady for five years, but something was going to have to give this year. He lost his bid for re-election and taxes are likely to go up in Westchester further encouraging folks to relocate to Greenwich.

The new tax law cut the mortgage deduction from $1,000,000 to $750,000, but left in place the provision that this could be shared over two houses. Where I live in backcountry, many of my neighbors are weekenders, and if they rent in the city, they can use the full amount of the deductibility on their weekend home.  Having said that mortgage deductibility for most weekenders was not a major factor in their decision to get a weekend house.

The reduction in mortgage deductibility may play in bigger role in our level of inventory. Since all the pre-12/15/17 mortgages are grandfathered, people who have larger mortgages may be reluctant to move and lose some of their mortgage deductibility when they get a new mortgage. The loss of deductibility of the interest on a $250,000 mortgage at 4% interest is $10,000. This means an increase in federal taxes of between $1,000 and $3,700 depending on your bracket. So, any reluctance to move may be more psychological, rather than financial. The impact on Greenwich inventory may be small, but could be larger in other areas where Greenwich sellers might be considering buying.

The Economy & the Stock Market

The stock market is setting new highs nearly every week, which means that people with big stock portfolios are seeing their wealth rise. The effect on Greenwich real estate at the high end last year was dramatic with high-end sales up 30% over 2016.

Now some people would argue that this is just evidence of wealthy homeowners fleeing the state and selling their houses at a loss and you can clearly find examples of this. The flip side of this is that 150 high-end buyers decided to buy in Greenwich last year. In fact, our buyers of the five highest price homes invested over $100 million in Greenwich real estate, which is a nice vote of confidence.

Other signs of a good economy are low unemployment and record holiday sales from what was supposed to be a dying retail sector. Lastly, this new tax bill’s lower rates will result in the injection of billions of dollars into the economy further boosting the economy. The higher stock market, better economy and lower taxes are all factors pushing real estate sales higher and will particularly benefit Greenwich with it’s many people in the financial industry.

We have a variety of factors that are encouraging sales in Greenwich and many other factors that tend to discourage sales. The situation is so complicated, that my fellow columnists, Rob Pulitano, Cesar Rabellino and I actually formed a team to help homeowners analyze how all of this applies to their situation.

Are sales and prices going up or down? The short answer is that at this point no one knows, and everyone’s situation is different. The one thing that is sure is that 2018 will set the mold for how Greenwich, and the Greenwich housing market, is perceived for many years to come. Are we going to be perceived as winners or losers in this whole situation?

Last year the town, the Chamber of Commerce and the Greenwich Association of Realtors funded a program to promote Greenwich as a place to live and do business, but money is a much more effective way to promote Greenwich. Nearly, every homeowner in town is going to have pay a significant portion of their property taxes with after tax dollars, resulting in an effective increase of 10 -37% in the cost of these taxes to these owners. If Greenwich were to announce that in sympathy with them, the town is keeping the tax rate flat, this would serve as a powerful draw for those people in Westchester and other high property tax areas. It also signals to high-end buyers that pay a lot of our taxes that they are welcome here. Lastly, it shows that the town has been a good steward of its finances and will be in the future.

The cost is only a few million dollars in a budget of over $400 million and it may have many times that effect over the next few years, if Greenwich continues to be seen as the place to live.