What’s going on in backcountry Greenwich? That’s actually a really hard question to answer. Some stats point to backcountry getting better. For example, our days on market this year are dramatically down to about 9 months compared to 15 months in 2017 and 12 months in 2016. On the other hand, our median price for a backcountry sale is down to $2.45 million compared to $2.68 million the prior year but is up from 2016’s median price of $2.20 million.

Our sales on an unadjusted, annualized basis come out to 39 sales compared to 45 sales in 2017 and 62 sales as recently as 2015. The good news for those of us who live in the backcountry is that we will very likely have more sales than that in 2018, as we have seen sales in backcountry shift to the fourth quarter, (but then again may be not this year).

The one scary number for backcountry homeowners this year is “1”, that’s the number of contracts waiting to close in backcountry. When I put in the search criteria in to the GMLS for backcountry contracts and that number came up, I was sure that it was wrong. We have 114 listings in the back country and we have had 31 sales so far this year how could we only have 1 contract in the backcountry.

So, I mapped all the contingent and pending contracts on the MLS and lo and behold there were 4 contracts, not great but better I thought. Unfortunately, it turns out that while the GMLS calls backcountry “North Parkway” they don’t really mean it. Two of the sales that are geographically north of the parkway are in Glenville according to the MLS. As to the other contract it turned out to be just over the border in North Stamford; so, we really do only have one pending contract in backcountry. As President Trump would tweet, “not good”.

It is not all bad news, inventory is down by 12% from last year and we have the previously mentioned big drop in days on market for the backcountry houses that are selling. Our highest price range in particular is looking much better. Over $10 million we had 24 listings at this time last year and this year we are down by more than half to only 11 listings. We also have had 2 sales over $10 million in backcountry Greenwich this year and last year we had none at this this time. 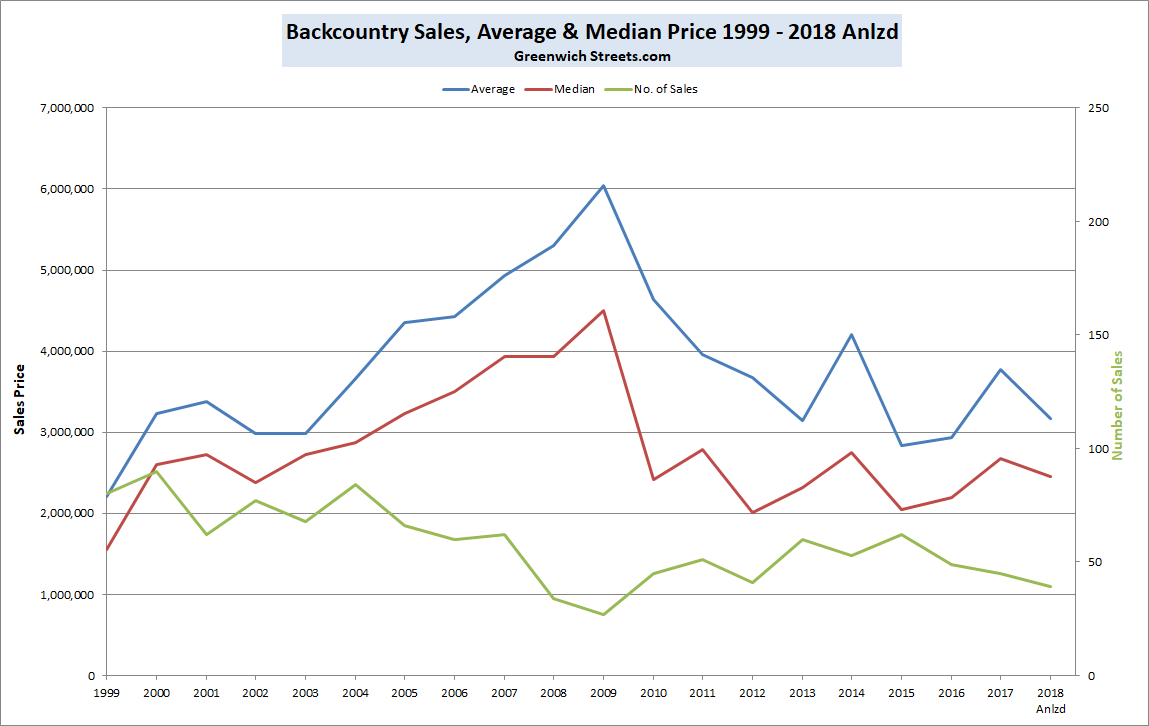 From $1.5 – $4.0 million inventory is down an additional 9 listings. What we are seeing is more people deciding that backcountry is a nice place to live and as a result our inventory in backcountry is down in most price ranges. On the sales side, we can’t really say till the end of the year since post-recession the 4th quarter has seen better sales. (Let’s go contracts!)

The reality is that you can over-analyze the market when you are dealing with only a few dozen sales. What we have seen is that when you look at price/s.f. the market has been stuck in a trading range between $470 and $565/s.f. for the last seven years with no clear trend. We have yet to have three years in a row where the price per square foot has continued a “trend”. 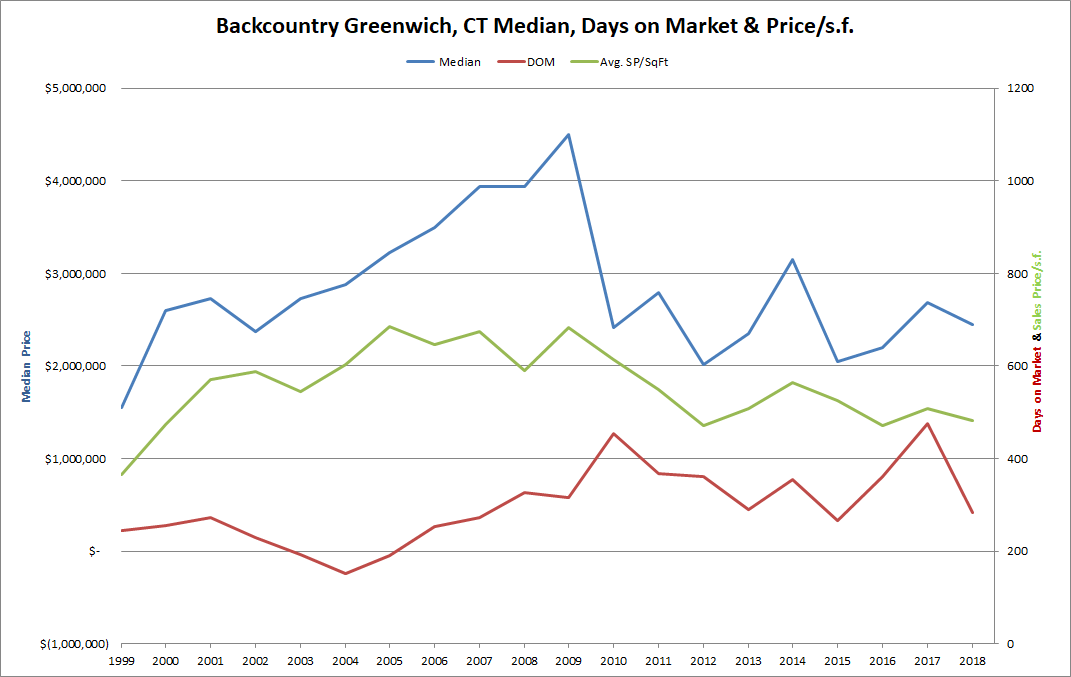 So, what does this all mean? Firstly, the backcountry market has not recovered like front country has. Old Greenwich, Riverside and central Greenwich continue to look good, while Cos Cob, Glenville and Pemberwick are arguably doing even better, albeit off a lower base price. Also, as you can see when you compare backcountry to mid-country, backcountry had a distinct bubble from 2004 to 2008. If you ignore this period, the “decline” in backcountry is more like a slow drifting. However, for anyone who bought in those years it makes for wrenching changes.

So, what can be done about this? Several groups are working on this. The Round Hill Association, under it’s new president, John Conte, has formed a committee to emphasize all the good things in mid-country and backcountry Greenwich and there are many. Some of the wealthiest people in the U.S. have made backcountry Greenwich their homes over the last 100 years and much of what attracted these people has not changed. The Town’s Economic Advisory Committee is also promoting Greenwich as a place to live. The BET’s no property tax increase budget this year finally got some national play in an article about Old Greenwich that appeared in the Wall Street Journal’s Mansion Global affiliate. (I might have helped that a little. 🙂

All these things move in cycles and backcountry will be back, but so far this year, it’s still mostly drifting, with occasional bright spots.