A poor beginning with a better ending 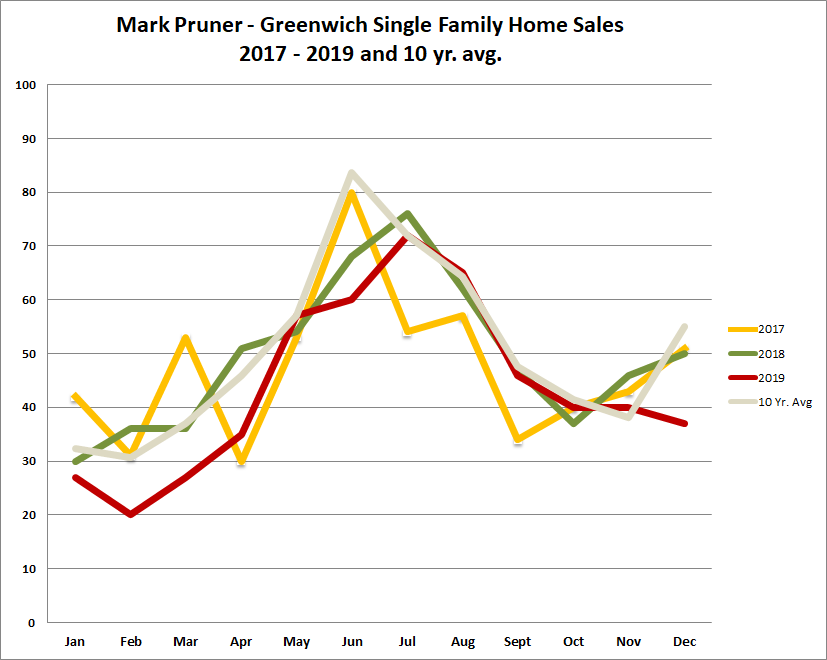 But this is the year-end report, so what happened in December, and that’s a really good question. In December 2019 we had only 37 sales compared to 50 sales in December 2018 and our ten-year average of 55 December sales. So, it looked like we ended the year on a down note and we did for the short sighted. However, when you add sales and contracts as of the end of December for both years we are looking at 109 transactions in 2019 compared to compared to 101 sales and contracts in December 2018 or an increase of 8%. And, that’s what we are seeing in the market place. I just had 3 showings over the weekend for 108 Pecksland, a house at a very good price, but that needs significant amounts of work, an issue that eliminates a large part of the buyers that are looking for new or near new appearance. This house hadn’t been getting a lot of showings and then come 2020 buyers were much more interested. People that had been waiting seem to be out looking in the dead of winter, albeit a mostly snowless winter so far.

Overall, the numbers for 2019 are down with only 527 sales for the year down 11.1% for the year, which is the lowest number of sales since the recession year of 2009 when we only had 370 sales. Our inventory as of 1/1/20 is also down to only 432 houses or 5.1% below last year. As mentioned, we ended the year with 72 contracts which is up 41.2% over last year so January should be a good month when those contracts close. Our months of supply for the overall market is about the same as last year with 9.8 months of supply.

Interestingly, the median price is up for the year from $1,765,000 to $1,866,666 or an increase of 5.8%. This is a number that won’t get reported by the national press that likes to bash Greenwich, but for once that’s OK, since the increase in median price is mostly due to a decrease in sales. In 2018 we had a major run-up in sales as for once we got a good amount on inventory under $1 million dollars due to the $10,000 cap on SALT deductions. This year things went back to normal and we had 29 fewer sales under $1 million. The result was a shift in sales to the higher end so our median price went up. Our average price stayed about the same at  $2,376,978.

As often happens the devil is in the details. Even in a down market sales from $2 – 3 million were up as were sales from $6.5 – 10 million. The higher range’s increase in sales was due to people picking up some real bargains as high priced houses particularly in the backcountry were sold at real bargain price. Here you can look at the doughnut or the hole. If you focus on the doughnut rather than the hole, the good new is that 41 buyers thought that Greenwich is worth spending $5 million or more to live here. You could argue that equal number of people wanted to move, many of whom were moving out of state. That numbers seems to be shrinking however as our high-end inventory, over $5 million, is down by 16 houses or 14.4%.

Our biggest sale in 2019 was also our most under-reported story as a house on Field Point Circle sold for $48 million, the second highest sale ever after the Cooper Beach Farm sale for $120 million in 2014. Since this a private sale those numbers are not included in the numbers here. Had this sale been included it would have raised the average sales price for the year by almost $100,000.

Our months of supply are looking better in December, but that is normally the case at year end, when sales continue, but not many houses are listed in the last two months of the year. Having said that, we are down 44 listings from $1.5 million all the way up to the very high-end as of year-end 2019. Our months of supply from $5 – 6.5 million is under 2 years and from $6.5 – 10 million increased sales and lower inventory means that months of supply have dropped almost 6 months to 29.3 months of supply.

We are seeing increased months of supply under $1.5 million as a combination of increased inventory and lower sales makes this market more of a buyer’s market. It is still below 6 months of supply, so sellers are happy, just not as happy as normal. Going into 2020 our contracts are mostly concentrated between $1 million and $4 million so we will see this segment do better in January as these contracts close.

The rest of the year promises to be interesting. The stock market is up, interest rates continue to stay low and concerns about a recession have mostly faded. At the moment buyers are busy, let’s hope it continues for the rest of the year.