Real estate appreciations statistics can be dangerously deceptive leading both buyers and sellers to make expensive decisions that in hindsight they wouldn’t have done. Here’s a guide to some of the bigger red flags to watch for.

When you see a figure like average house prices have increased by 5.803% you need to ask a bunch of questions for that number to mean anything and even then, for most sellers and buyers, that number is of only marginal usefulness. Often this appreciation is stated as Y-O-Y or year over year, but are they looking at all sales in the first half of 2018 compared to all sales in the first half of 2017 or is it just June 2018 versus June 2017 sales.

If you are talking just the monthly sales, then the appreciation number is less reliable as it contains fewer sales. Even worse, if we are talking appreciation on a monthly basis for a small subset of houses, say just sales in Cos Cob, the appreciation number is practically worthless since purely by luck you might have 5 predominantly higher sales this year compared to 8 predominantly lower-end sales last year. This is no way to determine if houses in Cos Cob are appreciating.  So, look at the time period and the number of sales that are compared in year over sales.

The end price ranges works a little, the middle doesn’t

Some people look at appreciation within a price range. The problem with this approach is that houses appreciate out of the price range, so a house that was $989,000 and appreciates to $1,044,000, an appreciation of 5.6% i,s not counted in the under $1 million dollar range and may actually be bringing down statistics, like $/s.f., for the over $1 million price range.

For the very top and bottom ranges, this effect is a little ameliorated as houses can only move into the bracket one way. If house prices are going up at the high-end for all houses over $10 million or down at the low end you for all houses under $600,0000 you can be sure that is a real price change, but the same can not be said for the reverse.

Luxury is not a percentage

Another variation of this is defining the luxury market as the top x% of the market, say 10%. The problem here is that sales vary from month to month so sometimes the top 10% in Greenwich might be at $5.5 million and other times it might be at $4 million. The result is that the average price for “luxury” sales in the 10% has very little meaning.

This luxurry by percentage also doesn’t work for more homogeneous communities, where the top 10% is similar in price to the top quarter. Lastly, I don’t want to be the one telling someone with a gorgeous multi-million dollar house that it is not a luxury house because it’s not in the top 10% of a high-end community.

Is seasonality a factor?

Another number that you see for appreciation is quarter-to-quarter sales price appreciation. This is another number that I personally ignore. The problem is that residential real estate has a major seasonality effect as you can see in the 10 year average line below. What is mostly selling in the first quarter are the leftovers from last year which tend to sell at a discount; whereas in the second quarter you have a lot of new listings selling with much shorter days on market and at closer to original list price. Each quarter has a different mix that problem so what appears to be a price appreciation/depreciation from one quarter to another is often just the seasonality of the sales. 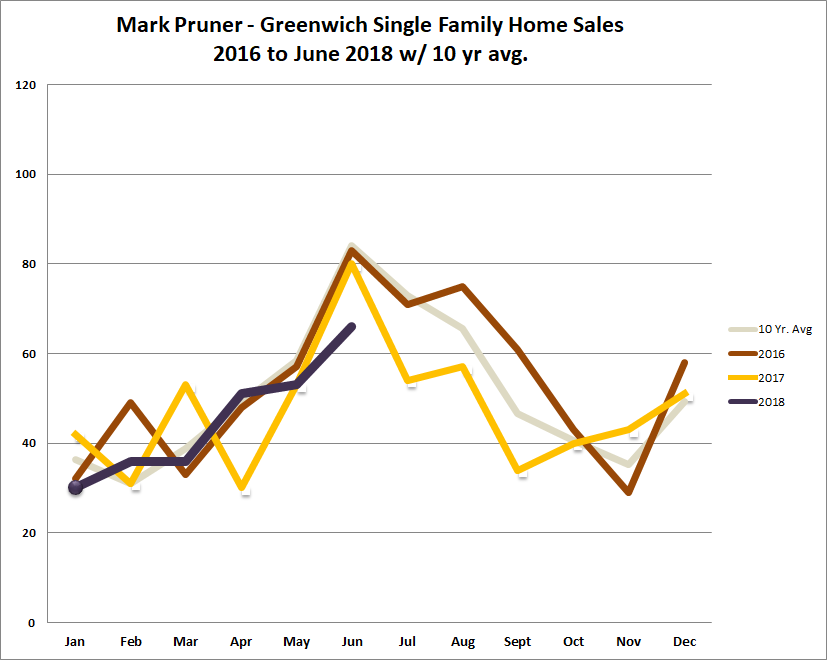 Differences in what price ranges are selling

But, by far, the biggest issue is a change in the mix of what is selling. Let’s say house prices are flat, heck let’s even say some high-end house prices are drifting downward, but if we have fewer low-end sales and more high-end sales than in the prior period the average is going to go up even though the value of individual houses is going down. This is just what happened this year. Our sales below $1.5 million are down while our sales over $10 million are up 350% from 2 sales to 7 sales. The result is that our average sale went from $2,402,151 to $2,541,557 this year an increase of 5.8%, but house values haven’t gone up nearly 6% in one year.

Median helps, but still has a mix problem

What some people say is don’t use the arithmetic average a/k/a the mean, use the median. (Instead of adding all the numbers up and dividing by the number of sales. Let’s line all the sale prices up and take the one in the middle.) In 2017 our first half median was $1,817,500 and the median for the first half of 2018 was $1,865,000 or an increase of 2.6% in the median price Y-O-Y or less than half of the Y-O-Y appreciation in the mean.

The median has the advantage in places like Greenwich where the high prices are so high of having lower volatility, so seven more high end sales only move the median the same as seven fewer sales below the median. The problem is still that if you have fewer sales below the “middle” number and more sales above that number the median is still going to go up even if all the values of the houses are drifting downward.

Now the ratio that I like to use is the sales price to assessment ratio. This compares what the tax assessor thought the value was at the last revaluation (10/1/2015) to what is sold for this year. Now some folks think that the Tax Assessor wants a high value for houses, but that isn’t so. What she really wants is for the relative value of all the houses to be correct so each house pays it’s fair share of the total budget as approved by the RTM. If the relative value of every house was increased equally, you’d still end up paying the same tax, so she has no incentive to inflate house prices.

The mandated assessment ratio is 70% so if a house sells for 1.42 times the assessment, (the reciprocal of 0.7) then there has been no appreciation. Now you would think that you can simply compare this year’s SP/Assmt ratio to last year’s ratio and get a better estimate of actual house appreciation in Greenwich and you’d be right, but it’s not quite that easy.

The problem is two part; changing properties and garbage data. The SP/Assmt ratio number are usually pretty tightly grouped between 1.35 and 1.70, so if you throw in a larger number say a ratio of 4 or 5 it moves the average a lot. This happens when a property is sold for land value and then a big house is built on it. It’s great appreciation, but most of the additional value comes from the beautiful new house.

The other issue is just bad data, agents miss a decimal point or two and the assessment ratio comes out to be 1,301 rather than 1.301 as happened on one listing this year. That single number totally destroys the average, so a couple of times a year I calculate the SP/Assmt ratio after taking out the top 10% and the bottom 10%.

Does knowing the sales appreciation percentage help in ?

Now you would think that is a pretty good number, new construction is removed (as well as a few demolitions), most human errors are removed and seasonality is not a major factor, but just what good is that number? If you are a buyer or seller trying to negotiate a sale does it really tell you what the value of that particular house has done. It’s of some help, but you really need to look at what houses of similar style, price range, condition and age have done in that particular neighborhood. When you do this in Greenwich you will find that there aren’t enough sales to be statistically significant. So the tow wide appreciation percentage may be the best hard number you can get as to what the overall market is doing, but it’s not going to tell you whether your particular house has gone and by how much. And, it definitely won’t help to figure out what it’s value is likely to be over the next couple of years.

In the end the best thing to do is consult an experienced Realtor when it comes to making those decisions and take all those numbers out there with a grain of salt.